The Well at the World's End Volume I 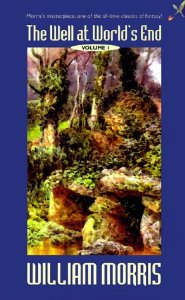 We spent Easter weekend with some friends in Denton, TX.  While there, I had the opportunity to go to the best used book store I've ever seen:  Recycled Books.   In addition to being clean, well-organized, and having the most amazing selection of books, they also had a wide array of collector's items.  As I was perusing the fantasy/sci-fi collector's section, my attention was drawn to The Wood Beyond the World by William Morris.  I glanced at it, saw that it claimed to be "the first fantasy novel ever written", but decided to put it back and picked up The Well at the World's End instead.  I didn't know anything about this book, but it fascinated me for some reason.  Plus, the back had a quote by C.S. Lewis saying it was great.  That, plus the $4 price tag, were enough to sell me.

All that said, I probably should have actually read some of the book to see if I would enjoy it, rather than buying it blindly.  I was quite shocked when I opened it up and the first thing I read was "Long ago there was a little land, over which ruled a regulus or kinglet, who was called King Peter, though his kingdom was but little" (1).  What?  Why does a book written in 1896 (about the same time as James Joyce's Dubliners, as a matter of fact) sound like it is from the 15th century?  I was disappointed, frustrated, and by page 20, I was ready to quit.  I pushed on, however, and I'm extremely glad I did.

The Well at the World's End may utilize archaic language, but once you get used to it, you realize what a rich world the story contains.  Ralph, the main character in search of the Well, is youthful, brave, and not afraid to love.  While at first I found the language to be a hindrance, by the end I found it added to the sense of fantasy and antiquity that make the book so interesting.

It's also interesting to consider Morris as an influence on Tolkien and all modern fantasy writers (a common claim I saw online when looking up information on Morris).  In terms of tone and style there were definitely some similarities to The Lord of the Rings (perhaps I will detail these on a later blog post?).  If you are at all interested in fantasy, and are willing to make the effort to get comfortable with the archaic writing, you will really enjoy The Well at the World's End. It surprises me to say this given my early dislike of the book, but in the end I was enthralled with the tale and can't wait to find out what happens in Volume II.

"Maybe thou art seeking for what is not. Or maybe thou shalt seek and shalt find, and there may be naught in what thou findest, whereof to give thee such gifts as are meet for they faithfulness and valiancy. But in thine home shouldst thou have all gifts which thou mayest desire" (257).

In that case I think you'll really enjoy it. I probably would have liked it from the beginning had it not taken me so long to get used to the language/style.

So here's an opening line that almost turned you off from the book. I haven't heard of this book, but I'll have to look it up if Morris had an influence on some of the Inklings. The quotes you have from the book do have a difficult, archaic writing style, but I imagine I could get used to it. Hope the next book is as enjoyable for you.

Yeah, I was so close to stopping for the first 20 pages, but I'm so glad I didn't in the end. I really would have missed out.

Let me know if you do find anything specific about Morris as an influence on any of the Inklings. The <a href="http://en.wikipedia.org/wiki/The_Well_at_the_World%27s_End" rel="nofollow">wikipedia article</a> on <i>Well at the World's End</i> mentions him as an influence on Tolkien and Lewis, but I haven't read the whole article for fear of spoiling the rest of the tale.

What's interesting is that it's actually just one book, but when it was republished in 1970 (the version I have), it was split into two volumes to reduce costs. Of course the main downside is that Volume I ends without any resolution. At the same time, it makes me confident that I will really enjoy Volume II when I do get my hands on it.