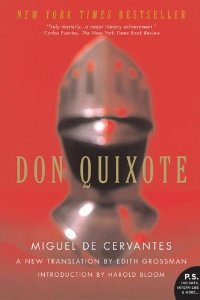 Okay, I confess I cheated; I decided to read only the First Part of Don Quixote.  This part, at 459 pages, is technically a complete book in its own right.  It was published in 1605, 10 years before the second part that makes up the other half of the copy you see depicted to the left.  I will get around to the rest of it eventually but, honestly, I just needed a break.

I feel bad saying I needed a break because I really enjoyed Don Quixote.  If you read my First Line post on Don Quixote you know I was having a blast halfway through the first part.  It was funny, intelligent, modern, and creative.

At about 300 pages in, however, Cervantes decides to interrupt what could have easily been the most interesting and entertaining part of the book with two complete novellas.  Seriously, he interrupts the action to tell two complete stories that deal with characters and plot that are entirely unrelated to Don Quixote.  To be fair, these stories are good, but at this point in the main novel I'm reading, I honestly just don't care what happens to these other characters.  I want to get back to Sancho and Don Quixote, not read about The Man Who Was Recklessly Curious.

This post sounds a little negative, but only because I said so many positive things previously.  Fortunately, all of those positives are still true and, as a result, Don Quixote is still a recommended read.  However, I can completely understand why an abridged version would remove the two novellas that come so late in the work.  In fact, I would go so far as to say, if you do decide to read Don Quixote, skip the novellas and finish the main story.  Then, because they are good enough in their own right to warrant it, go back and read each novella.  I know it's a little vain to think that I can suggest a better way to enjoy a book than the author, but I really think your experience will be far superior if you separate the actual Don Quixote story from the two novellas.

"That’s the way," said Sancho, "I've heard it said in sermons, we should love Our Lord: for Himself alone, not because we hope for glory or are afraid of punishment.  But I’d rather love and serve Him for what He can do" (263).

I would advise someone to at least read the second novella, as the history of 2 characters is revealed in that story. As far as "Recklessly Curious" I also found it frustrating to go through this story interruption. However, I wouldn't go as far as to assume its unrelated. I was struck by the contrast of the tragic ending of that story, to the happy ending of several conflicts afterwards. However if I really am forced, I can't see any logical relation besides that, Cervantes really pushed including songs, poems, and so on in his book, so I guess he couldn't help throwing in entire novellas also. Probably going too far for my taste.

I'm also finished with the 1st half of Don Quixote, and am taking a break before the 2nd half, lol.

Hi Mike, thanks for the comment. Interesting point on "Recklessly Curious"; maybe I let my frustration with the interruption get in the way of asking myself why Cervantes would have included it. After all, it's hard to imagine he put it in their just to make the book longer.

I still haven't returned to the second part, but I know I'll get there eventually. Feel free to stop by and let me know if you do get around to reading it!