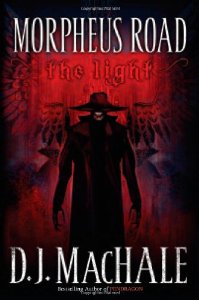 I love reading young adult fiction while on vacation.  Last Christmas I tore through The Hunger Games in less then 36 hours, and it was absolutely fantastic.  I didn't know much about The Light, but I have listened to the first three books in MacHale's Pendragon series, and they are good enough that I was willing to give this new series a chance.

The Light is, ultimately, a ghost story.  In fact, the book starts with a hip "I believe in ghosts now" intro.  From there, it follows Marsh, the main character and narrator, as he attempts to solve the various mysteries surrounding his haunting and his best friend's disappearance.

While The Light was the fun, light reading I was looking for in a vacation book, it was also extremely disappointing.  In spite of having an entirely different storyline and cast of characters, The Light felt exactly the same as the Pendragon books.  In fact, in terms of the main character, there wasn't anything to distinguish Marsh from Bobby Pendragon.

MacHale certainly isn't a bad writer, but I'm starting to get the impression that his versatility is severely limited.  If you aren't absolutely in love with novels narrated by smart, sarcastic, angsty 15 year olds, who are just trying to figure out this crazy world, then I wouldn't bother with The Light, or anything else written by MacHale.

It's unfortunate, too, because he has some great plot ideas.  I may even continue listening to the books in this series, just to find out what happens next, but I definitely won't be reading them next time.  Is that hypocritical, to continue reading a series that I won't recommend?  Perhaps, but I am a sucker for a cliffhanger.

Too bad this one didn't work for you. I like YA as a break too -- I also tore through both books in The Hunger Games series. I think your critique of this book is one of the reasons I get skeptical of YA, it can sometimes be repetitive and hard to distinguish characters from one another. Although I'm sure the same charge can be leveled at adult fiction, so it might be a silly bias.

I think it is more prevalent in YA fiction. I'm about to make an unfair generalization, but I think YA authors sometimes get lazy because they don't think their audience will be as discerning about the quality of the actual writing.