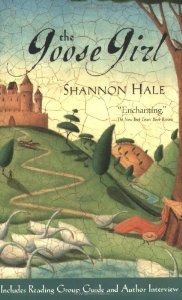 Goose Girl is not the type of book that would normally catch my eye.  However, after reading Christy's review of the sequel I figured it would be worth requesting from the library and listening to it when I got the chance.  I had it for a few weeks and, honestly, I didn't have a plan to start it anytime soon until I saw Erin's claim that Shannon Hale "has not written a bad book".

Convoluted story of why I started reading it aside, I'm really glad that I did.  Goose Girl seems pretty straight forward at first - a crowned princess of a small kingdom is, unbeknownst to her, about to be sent off to marry the prince of a distant kingdom.  As the story progressed, though, I was consistently impressed both with the number of times the plot surprised me and with how well-realized the world and characters were.

True, I've only read one book by Shannon Hale now, but I can see why Erin would say she hasn't written a bad book.  In addition to a consistent, deep world full of entertaining characters, Goose Girl is also filled with some beautiful writing.  Even the first line ("She was born Anidori-Kiladra Talianna Isilee, Crown Princess of Kildinree, and she did not open her eyes for three days") has a sense of weight and meaning that I find appealing.

My only real complaint was with the audio production.  Instead of having a single narrator, this book had a full cast.  I don't mind this on principal, but with so many actors participating, it's inevitable that some of the performances will not be as good as others.  Ultimately, instead of enhancing the experience, the unevenness of the performances just made me wish the main narrator (who was excellent) had been responsible for everything.

I recommend this book without reservation.  Don't let the title (and in some cases the unfortunate covers) convince you that this is a book only for girls.  Anyone who is willing to read a fairy tale based fantasy will be able to appreciate Hale's quality story telling.

Would you say this is more targeted toward children or young adults?

It's probably on the young side of young adult. Amazon lists it as grade 6-9 which sounds about right. There's not any foul language or excessive violence, but the quality of writing strikes me more as something a young teen would read than an 8 or 9 year old.

Why do book companies insist on putting pictures of real people or scenes from the movie version of books on covers? I can't imagine anyone liking these (maybe I'm wrong). One of the great things about books is the ability to create how characters and scenery will look in your imagination. Art covers are understood to be someone else's interpretation so it does not seem to cloud my ability to change how things will look, but as soon as I see an actual photo I cannot shake that image from my mind. My imaginings of books rarely have anything to do with the real world and I would like it to be kept that way. Rant over.

I'm so happy you liked <i>Goose Girl</i>, and excellent quote! It's one of those that instantly puts you in the setting, I mean, what better fairy tale princess name could there possibly be? I agree with you that Hale is masterful in depictinig her worlds. I just loved the mythology she created about all the different forms of 'speaking'.

Yeah, the magic of the world is consistent and compelling. There's nothing heavy-handed about it, and it feels natural. You can tell she put a lot of thought into it, and I appreciate that.

I totally agree! I first read The Goose Girl years ago, and I have loved everything about it from the first, including the beautiful mosaic style cover. Imagine my dismay when, looking to see if Hale had anything new at the bookstore, I saw the new covers! I wish she'd have stuck with the originals.

That is so frustrating, and it seems like covers do get progressively worse as it gets further from the original edition. As though the publisher is thinking "Well the author won't even notice, let's make the cover as bad as possible!"